The response was predictably polarized.

Agent advertisers at the event ate it up: 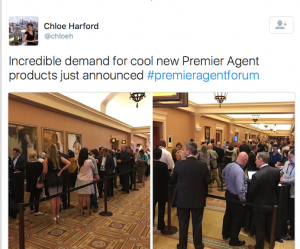 Commenters outside the campfire circle reacted as if reading the announcement from Zillow backwards revealed a real estate agent kidney harvesting operation:

Allow me to step into a space somewhere in between.

First, as we have said here for the past three years, Facebook is the greatest farming tool in the history of real estate. Period.

In fact, we viewed Facebook as a nascent Zillow competitor at one time and suggested, back in 2014, that Facebook farming would eventually supplant online lead-gen.

So, I’m surprised they didn’t do this deal sooner.

Second, more than anything, this is about seller leads.

Buyer leads are real estate junk food; seller leads are haute cuisine. Portals, structurally set up as “home search” applications, have mostly served up the former. This has been a weakness. But Zillow, having started with what was essentially a seller feature (the Zestimate), and having invested hundreds of millions to build a “Massive, enduring consumer brand,” to use Spencer Rascoff’s phrase, positioned itself to eventually escape this problem.

But this is bigger than just generating more seller leads. It’s about a broader and massively more productive approach to consumer engagement altogether.

I have used this image in several presentations I’ve given over the past couple years:

My point: most agents move from deal-to-deal without taking the time think about what comes before or after. It’s a Sisyphean existence: close the deal, descend the mountain, and wait for another boulder. The passive online lead-gen paradigm of the past 15 years has only reinforced this.

The future belongs to those with an expanded range of vision — the agents who cultivate the farm before the deal and master the art of loyalty marketing after it’s done. Zillow has built a brand, and an audience, that spans that full range. Now, they’re taking their 100,000 agent advertisers along with them.

Finally, some have pointed out that the Facebook ads Zillow will run for agents are co-branded with Zillow, as if that were some kind of problem.

We do a lot of work with consumers. Let me tell you something: They like Zillow, they know Zillow and, yes, they trust Zillow.

If you’re an agent already sold on Zillow advertising, why wouldn’t you want the Zillow brand along with you?

You may call me a Zillow shill. Please. I stopped getting invited to Zillow cocktail parties years ago.

I perceive the vulnerabilities in their business model, hear all the stories about agent churn, and have cringed at the aggressiveness with which they have sometimes approached “the industry.”

But here’s the truth: There is more to be learned from Zillow than there is to be gained from complaining about them.

We work with a select number of brokerage companies that understand this. What are they doing right now?

Sometimes I feel like a lunatic — a looping, ranting freak in the woods professing a vision clear only to me.

Am I crazy, or will you join me out there?

Leading Real Estate Companies of the World (LeadingRE) holds a unique place in our industry. It’s a growing company with a strong brand that connects fiercely independent real estate brokerages across the world. LeadingRE’s roots go back…