I’ve met with more truly interesting real estate startups in the past 30 days than I have in the past 5 years.

Software, such as we’ve understood it – CRM, transaction management, email marketing, etc. – is considered pedestrian by these new entrants. The big play is in the stuff that sits under, inside or on top of these user interfaces.

These things are like the music at a dance club, the final ingredient that makes the building, and the people in it, come alive. Who wants to be the janitor?

Another thing: most of these companies are attacking this problem: 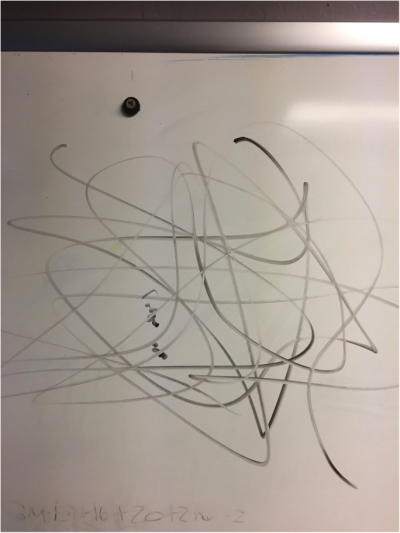 I made this scribble on our whiteboard the other day during a meeting to characterize the state of the real estate industry. (I know, heavy-duty thinking here!)

The world in which the agent and broker lives is chaotic. Confusing. Unclear. A million+ people feeling around in the dark for their next customer, operating their businesses blindfolded and more or less wasting a ton of money on marketing, leads and other stuff dangled into the abyss.

Lots of companies profit from this confusion.

Data brings clarity. Algorithms compress time. Predictive models save money. These things help brokers and agents know more about their customer, their business and their future.

The new wave of real estate tech is all about this. Lighting up the darkness. Clearing the confusion. Making it possible for good agents, and good brokerages, to be smarter about how they do their thing.

When this happens, the best become better and, maybe, possibly, we may at last see what so many have called for for so long: a professionalization of the ranks.

Here’s what I think about the topic of MLS consolidation:

Which brings me to a case: Bright MLS [Disclosure – they’re a 1000watt client.]

Bright is the result of the combination of MRIS, which served DC, Baltimore and big swaths of Virginia, and TREND, which covered Philadelphia, most of Delaware and a vast suburban chunk of the mid-Atlantic. In all, parts of six states are now in one MLS.

Factors 1 and 3 above were definitely at play in the Bright deal. Both TREND and MRIS were among the best-run MLSs in the country, but they operated in an area that is more or less an undivided block of people and housing. The boundaries of TREND and MRIS were, in important ways, artificial.

But the most instructive thing about Bright’s coming to be is how it happened.

First of all, someone was willing to stick their neck out. David Charron, CEO of MRIS and now Chief Strategy Officer of Bright (and President-elect of CMLS – dude’s not going anywhere), was willing to put his position into play for the sake of making a deal happen that he perceived as beneficial to his customers.

Leadership, plain and simple. David has always been one of the smartest people in real estate. Now he’s something of an MLS folk hero.

The other notable characteristic here was the political finesse and diplomacy David, Tom Phillips (TREND’S CEO and now CEO of Bright) and the boards of both MRIS and TREND exhibited here. Where other consolidation or expansion efforts have been marked by acrimony, the Bright deal was an act of openness, consensus building and a smart business case presented rationally. This made a complex deal with 43(!) association shareholders possible.

So, the debate about the degree to which MLS consolidation should happen will roll on. Those seeking to understand how it could happen could learn a lot from spending some time with the people behind Bright.

From my industry perspective, Z is now two things:

First, big. Zillow’s closing in on $1 billion in annual revenue. Of that, $604 million came from real estate agents. Less than 100,000 real estate agents. NAR gets about $130 million each year from its 1.1 million members every year for something – the ability to wear the name “Realtor” – that one would think is pretty fundamental.

But then the boring part: that $604 million is more or less a transference of dollars from one medium, the newspaper, to another – a massive digital media company. Zillow may change the composition of the real estate industry in the course of pursuing its goals (which should and does give pause to some brokers), but it really isn’t changing anything basic about the way real estate is bought and sold.

Zillow is a giant. But it is essentially a conservative, establishmentarian enterprise at this point.

Success does that to you.

You never expected this

Roses. Chocolates. Hallmark. The customary expressions of Valentine’s Day love. On any other day, these things would feel special. But doing what everyone else does – the expected practice – doesn’t quite capture the message I want…