This industry loves to talk about Compass. We scratch our heads at what makes them unique. How are they really different, minus the money? Why are they capturing so much attention? How will they sustain their pace? What are they really offering that isn’t already out there?

Yes, they do have a mountain of cash. But they have also managed to formulate a unique selling proposition. This USP is made from the same basic ingredients most other brokerages have; it’s just better executed, and therefore more compelling.

I know what you’re thinking …

But their offering is built around technology and that technology is nothing special. It doesn’t do anything we aren’t already doing.

Exactly. The important thing to understand is that it doesn’t matter. They are telling a story, coherently and consistently, that their target customer is moved by.

They are, in essence, following the Schlitz effect…

“The beer that made Milwaukee famous”

Schlitz Beer was a Milwaukee brewing company that started in the early 1900s, and ultimately, was purchased by Pabst Brewing Company in 1999.

Schlitz was considered the beer that established Milwaukee as a U.S. brewing capital. The company went through many ups and downs in its day, but was at or near the top of the domestic beer market at several points.

There’s one particular advertising story about Schlitz that I love about how it came upon a strategic marketing angle that, on the surface, seemed nothing special. But it helped push the brand ahead of its competitors, leaving them scratching their heads saying, “but we do that too…”

Schlitz had hired a local ad agency to come in and cook up a new ad campaign for them to help their waning sales. During the agency’s tour of the brewery, they immediately noticed the insane attention and detail that went into the brewing process.

They saw plate-glass rooms filled with filtered air where beer was dripping over pipes so that it could be cooled in purity. They saw how every pump was cleaned twice a day to avoid contaminations and how every bottle was cleaned four times. They saw artesian wells dug 4,000 feet deep to reach the purest water.

The lead copywriter, Claude Hopkins (who tells this story in detail in one of his books), immediately saw an opportunity to advertise purity through the details of this intricate process.

The people at Schlitz thought he was crazy at first because, they admitted, every brewery essentially did the same thing.

At the time, all the major beer companies were making claims about the purity of their beer. But not one was going to great lengths to show and back up those claims.

Thus, the successful Schlitz “Purity” campaign was born. They messaged the details of their brewing process, the care that went into every step, the science…and how it all led to the purest beer money could buy. 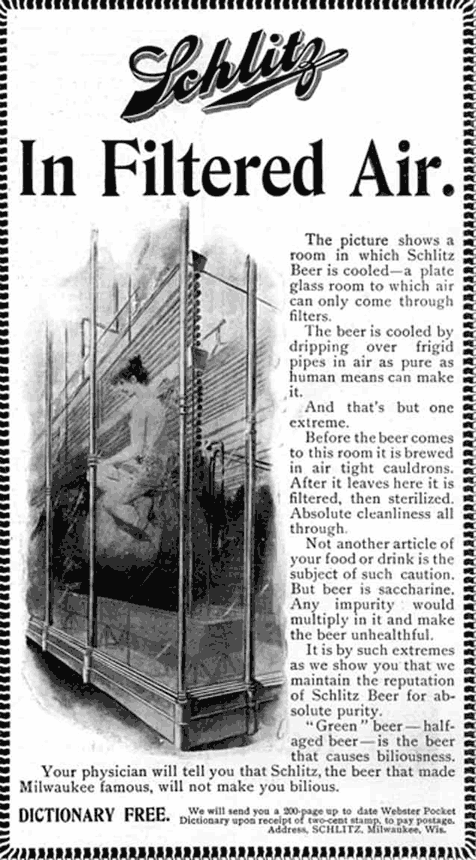 It was a hit with consumers and pissed off all their competitors. This campaign is credited with taking Schlitz from fifth place to #1 in the domestic beer market.

These, along with a broker’s license and E&O insurance, are the basic ingredients of an American brokerage. When said aloud, they may not seem special or different.

But Compass, like Schlitz, has taken these basic ingredients and labored over the details in the messaging and presentation to their target market, agents. They don’t just say they have the best agents; they labor over showing their agents in the best possible light. They don’t just say they have a big vision for the industry; they go to great lengths to show how serious they are, to articulate vision through leadership and massive presence in markets they are entering.

Look, I’m not a Compass fan girl – though I appreciate their brand and marketing prowess. I, like everyone else in real estate, have been watching them and wondering what the special sauce is and this story about an old beer company connected some dots for me…

Often, there’s tremendous value in simply articulating basic ingredients in a labored, elegant way. In fact, Hopkins has said he used what he learned from the success of the Schlitz campaign in many others for different brands throughout the rest of his career.

It could really be that simple.

If you’re running a real estate/proptech startup, you’ve gotta apply for Realogy’s FWD Innovation Summit. There are lots of hackathons and pitch events these days, but FWD is the room you want to be in. There’s a…