I’m not attracted to any of that.

It’s why we rolled out the red carpet when Ken Robbins and Jason Dempsey called last year and asked to come to Portland for a day of brainstorming.

Ken and Jason are retired lieutenant colonels, armed with staggering intellect, Ivy League degrees, Pentagon experience and a combined 40 years of service. They are built to disrupt.

Disruption was the last thing on their minds.

Instead, they found something many would avoid – a nook left completely unattended. A cranny that needed to be filled.

The problem: A quarter million military personnel move every year on a 2-3 year rotation. It’s a vicious, unavoidable cycle. Enlisted personnel receive their PCS (permanent change of station), and are given a few months to pack up and move out.

In most cases, the burden of the move falls on the unenlisted spouse. Harsh deadlines. Colossal decisions. Unbearable stress. And no single resource to ease the pain.

Ken and Jason want to change her destiny. We signed on to help.

A tribe helping a tribe

When a PCS order comes through, the military spouse begins a mad dash across a dozen search sites, hundreds of Facebook groups, Pinterest boards and local websites to cobble together a plan of attack.

Too often, a military family ends up storing their belongings and moving into a last-minute rental. The wear and tear on them is often as visible as the whispers, imprints and fades on a pair of heavily worn raw denim.

The challenge: Find a better way to get military spouses and their families critical information from trusted sources, fast.

Our whiteboard bled ink. They’d need deep, local content searchable by base station. But where would the content come from? What if they could harness the power of the tribe by enlisting the services of military spouses? People who have already been through PCS and solved the riddles of their new location.

Ken and Jason pulled together an army of local content creators for their respective bases. Outfitted with cameras, keyboards and local experience, they began pulling together the information they knew others would need when moving.

These on-the-ground contributors can field questions and perform tasks such as recon on properties, schools and amenities, easing fellow spouses through the process. A life-saving necessity for military spouses.

A tribe helping its tribe.

Military people know how to execute.

Ken and Jason immediately acquired a popular military blog founded by two dynamic military spouses, Lauren and Amy. With close to two dozen PCSs under their respective belts, they’ve overcome every hardship and emerged with a desire to help others.

This provided the project critical elements – a library of valuable content, street cred within the spouse community, marketing power and people who embodied the heart, spirit and soul of the idea.

Our charge was to create the full identity for this new organization. The name, the look, the feel, the values, the words, the website. The marketing.

The image we conjured up was Rosie The Riveter. An idyllic symbol of the power of strong women. Ken and Jason’s idea tapped into that same can do attitude, but differently. This wasn’t about women working in factories doing men’s jobs. This was bigger. Better. Stronger. It needed a name that combined all these emotions and yet stayed true to the category.

We unveiled MILLIE. Short for “military”, but with a strong feminine touch. It can stand tall as a new branch of the armed forces. People serving military families in critical times of PCS. 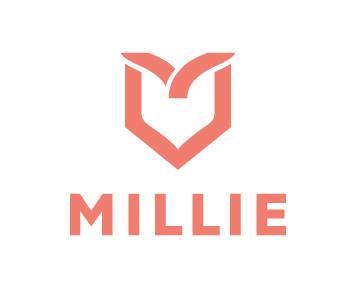 Ken, Jason, Lauren and Amy flew to Portland and chaperoned me through a tour of Joint Base Lewis-McChord outside of Seattle. I interviewed a lunchroom filled with spouses. I visited with the base colonel inside his war room. Spoke with a host of enlisted personnel.

It was a lifetime of camouflage all in one day. I felt the full metal jacket of realism that is military life for the unenlisted. I understood her hardship, her sacrifice and her devotion to her family and our military.

That day radically shaped and inspired our creative direction for the identity design, website design, an investor pitch deck and marketing plan. And of course, schwag – the most important asset of all! 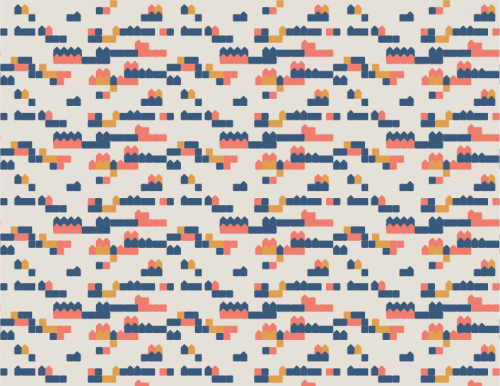 (pictured above: the Millie brand pattern)

Last week, Millie went live in a handful of bases. More bases will come. Execution and patience are the Millie Way.

Born from a sound idea, compassion and sincerity, the only thing this idea disrupts is the void that existed prior.

That’s the only type of disruption worth undertaking.