This is why we ride

4,308 people wrapped in tight lycra and colored jerseys stretched as far as I could see. On any other day, they’re cyclists. Enthusiasts. Athletes. They ride for health. Fitness. Breaking personal records. Experiencing the thrill of the outdoors atop carbon fiber.

At 7:45 a.m., in the humid Texas morning they crossed a starting line in pursuit of a more important challenge: Raising funds for cancer research and support.

Everyone has a story.

By my count, at least half of the people who rode told theirs through the dedications they pinned on the backs of their jerseys, featuring names and pictures of friends and loved ones who succumbed to this disease.

Around mile 50 while chugging uphill, one rider’s dedication hit me like a bullet. It included a picture of a young man no older than 20.

“To my big brother. I miss you so much.”

I rode alongside this rider, who was struggling despite being in first gear.

“You doing OK?” I asked, a common courtesy on long rides like this.

“I’m OK,” she said. I could tell she was winded. I reminded her to pace herself and drink more water.

“I’ve only been riding for six months,” she said. “And this is the furthest I’ve ever gone. My legs feel like concrete, but I have to finish!”

A few tears mingled with my sweat.

I remained silent for a few seconds before I suggested she draft behind me for a while. Fifteen miles to go to the 65 mile rest stop. She’ll make it.

My mother was diagnosed with ovarian cancer when I was in my 30s. Doctors gave her six months to live. Lung cancer ravaged my father in what seemed like seconds. Within weeks of being diagnosed, he died. That was three years ago.

I’ve been advised to get tested every year.

Sadly, it’s one shared by too many others.

It’s why we ride.

100 miles is a long way. Even for a seasoned cyclist.

The 90+ degrees extends that distance. The persistent headwind doubles it. The discomfort caused by these conditions is a cyclist’s biggest challenge.

It’s a discomfort every cancer patient would trade for.

have broken up into smaller clusters. By mile 70, you find yourself on long stretches by yourself.

Your wrists hurt. Your neck strains. At any moment you could cramp up.

The mind drifts off to places of comfort. A chaise at the pool. A massage table. A loving embrace.

I went to a place I often go when I stop and think about the realities of cancer. What if I were diagnosed? Or Lori. Or any of our kids. Or a friend. Or you.

We’re all touched by this disease. Those who contract it and die. Those in remission. Those who love both.

Real estate lost Clint not too long ago and it touched so many people beyond his immediate family.

Cancer is still very much a death sentence from which few escape.

They expect to have a cure in 30 years.

I pulled into a rest stop. A cluster of riders passed me pulling out. The lead rider was wearing a Long and Foster biking jersey. Familiarity brought a smile to my face.

I crossed the finished line with 20 other riders, strangers who grouped together during the final 10 miles.

The finish line is split into two lanes. The right is reserved for survivors. Lined with high school kids passing out yellow roses – one to each survivor.

Of the 20 I finished with, six took their roses.

This is why we ride.

The Livestrong Foundation has raised half a billion dollars for cancer research. This is one medal no one can strip from Lance.

Early that morning, Livestrong CEO Doug Ulman addressed the crowd and invited Lance up to speak.

A deafening cheer. It wasn’t for Lance Armstrong the disgraced cyclist. It was for a different Lance. The co-founder of Livestrong. Cancer survivor. 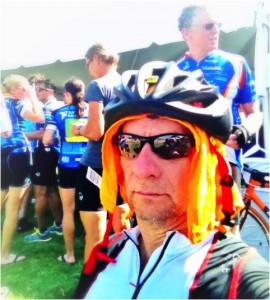 I loitered around the food tent for about an hour. A young band played Texas rock on a stage 100 yards away. A five-foot-wide bucket of ice water with hundreds of yellow washcloths floating inside provided everyone respite from the burning midday sun.

There was a nice hotel room to go back to. A pool to swim in. A chaise to rest a weary body. I chose a patch of lawn under the canopy of a tree instead.

I wasn’t ready to leave. 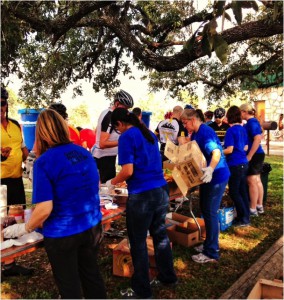 On that day, hundreds of volunteers, young and old, male and female, catered to 4,300 riders – the largest turnout in this event’s history.

On that day, the phrase thank you was repeated a million times over. From every rider to the many policemen who kept traffic at bay to every single volunteer who checked us in, assembled our bikes, manned the rest stops, prepared food, donated nourishment, plotted and manned the 100-mile course.

Without them, none of this could take place.

On that day, the 15th anniversary of the Livestrong Challenge and the largest ride the city of Austin had ever sponsored, $1.7 million was raised for the foundation’s program and services.

On this day, Thanksgiving, I think one more selfless thank you is in order.

Tonight, I’ll gather with my family over dinner and recite our lists of things we are thankful for just like you will probably do with yours.

But now, to our customers, readers, friends and foils: Thank you.

We are sincerely grateful to be riding with you.