Three years ago, I wrote about push notifications and called them a “monster opportunity for real estate”. I think it’s fair to say that since then, this prediction has borne out. Perhaps in spades.

My own notification situation got so out of control that this past New Year’s Eve I took the radical step of declaring bankruptcy and turned off all notifications on my phone. Admittedly, my use of apps is an edge case – not many other people I know have dozens and dozens of real estate apps installed on their phone. (Hey, it’s work, right?)

Notifications themselves have evolved since 2012. In iOS 8, we can now interact with them, and they now come packed full of context: time of day, location, and more.

The best way to see what I’m talking about is to check out some of the real estate widgets that live in the Notification Center on your iPhone. If you haven’t enabled any yet, pull down from the top on your screen in iOS, scroll down to the bottom of the Today window and tap the Edit button. Pick and add your favorite real estate apps (most now have widgets) and you’re off and running. 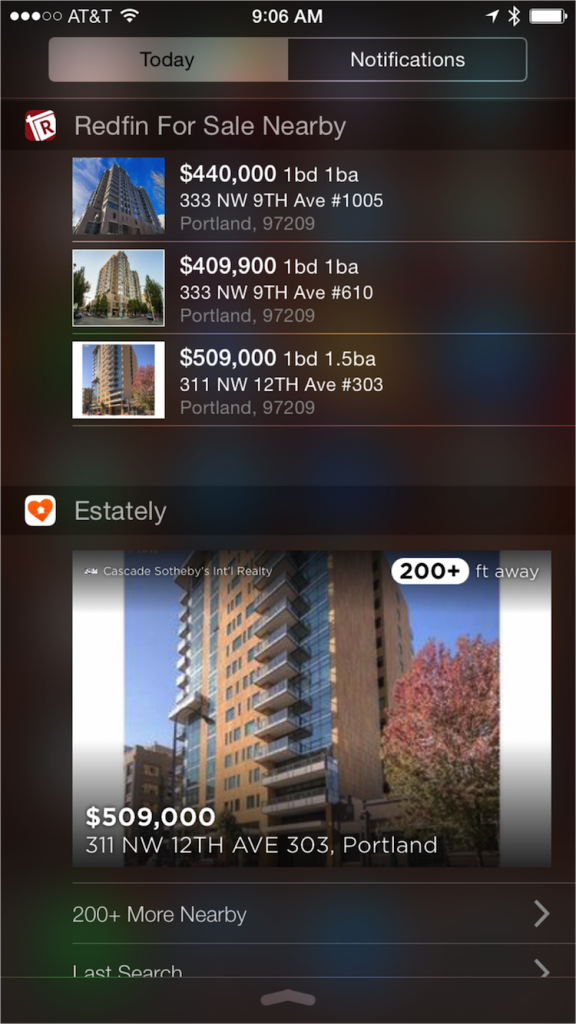 Android has a very similar interface with its Google Now Cards. Zillow was a notable launch partner there this past January.

Bottom line on either platform: the data is contextual, persistent, glanceable and, perhaps most transformatively, does not require the user to search.

Think about that for a moment. The very paradigm upon which this industry has structured its primary use case for data up until this point – real estate search – is not at play in this world. At this level, for a casual consumer, the listings are just there.

Our move to mobile, to date, has really been about re-defining software and experiences from a desktop environment down to a smaller form factor. But as we move to smaller and smaller and more personal devices – read wearables – I believe we stand on the cusp of yet another transformative moment. The notification may be the primary – and perhaps only – way consumers interact with real estate data in the future.

Of course, this entire thought exercise is rooted in the imminent launch of the Apple Watch. But this post isn’t really meant for prognostications around the success or failure of that device. (I’ll save that for the future.)

It’s more a realization that the push notification opportunity still exists in 2015. Perhaps even more so than it did three years ago.

Four years ago, I wrote a post outlining some of the problems I saw in the MLS world. It was a complaint born out of experience working with brokers and software developers struggling with a siloed, politically irregular…