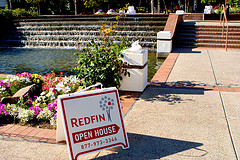 Redfin expanded into Oregon this week.

I’m excited – if for no other reason that I am finally able to use one of the best online search interfaces in my home market.

We’ve come a long way with search since the introduction and explosion of map-based search tools not so many years back. And while the tools available to consumers today are better than they’ve ever been, I still think there are more exciting things to come.

Here a few things that get me fired up when I think about the future of search:

Mobile platforms like the iPhone and Android have kick-started the buzz around location-awareness, and it’s grown into one of the hottest categories in technology right now. Companies like Foursquare, Loopt and Gowalla have emerged as major players for consumers’ attention.

And as web sites become more app-like, location awareness will spread to the browser. Already services like loki.com (created by location data giant Skyhook Wireless) allow developers to add location to their sites through an API. And the latest version of the Firefox browser uses Google Location Services by default. Location and search are inextricably linked, so it won’t be long before some enterprising service decides to marry the two on the desktop.

Homequest is a Portland-based company to keep an eye on. They’re building a intriguing suite of solutions on top of the open source WordPress content management system. Their IDX plugin, released earlier this year, goes a step further than most other IDX solutions by allowing site owners to embed geo-coded blog posts they’ve written alongside MLS listings.

I think this co-mingling of user-generated content alongside listings is going to add a new dimension to search, bring greater relevance to neighborhood overviews and has the possibility of firmly establishing agents as local market experts.

Bing Maps is really showing us where mapping on the web is going. Google Maps is looking a little dusty in comparison. Fire up Bing Maps (you’ll need Microsoft’s Silverlight plugin installed in your browser) and check out the new Photosynth layer. Photosynth takes 2-dimensional photography and applies it to 3-dimensional space creating instant renderings of places.

If you haven’t already seen Blaise Aguera y Arcas’ demo at TED this year, you can get a sense of where this is all heading.

Google’s Street View added a new dimension to property pages and was quickly adopted by most of the major search portals. Immersive Media, a company that cut it chops this month at the Winter Olympics in Vancouver, broadcast NBC’s Today show in 360 video.

360 video, you ask – how could that change online real estate?

Bundle all of this technology together with the potential of new gesture-based interaction with our devices and we’re entering what I believe will soon become the Golden Age of real estate search.

The following companies have been added to the 1000watt Index this week. All submissions are reviewed by the principals at 1000watt Consulting before publication. Publication in the 1000watt Index does not constitute an official recommendation or endorsement,…