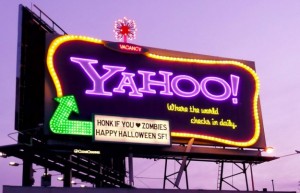 Driving home from the rare date night my husband I get now that we have a toddler, our conversation stopped dead in its tracks.

I knew exactly what he was talking about. For as long as I’ve lived in the San Francisco Bay Area, Yahoo! has had a billboard visible from the 101/80 freeway as you enter downtown and get on the Bay Bridge heading east.

It was iconic. Emblematic of the early dot-com frenzy that once defined the city. A reminder of what we’re all about here. Building something from nothing. Breaking rules. New ideas. New technology. No restrictions.

The Yahoo! marquee is gone now. Its motel-like lights and quirky messages vanished.

“Where the world checks in daily”

This was the slogan that greeted San Francisco visitors and commuters for 12 years every time they headed east on I-80. Without it, I almost felt like I didn’t know where I was driving to that night.

It got me thinking: If real estate had an iconic billboard like Yahoo!’s that really defined the times, what would it say?

Where the world settles for less online because it’s too complicated to get right.

Where the world has no attachment to particular brands or agents.

Where people entrust the biggest transaction of their lives.

Where standards are low.

Right now, the collective feeling about real estate is laden with apprehension. Both homeownership and the industry are in dire need of an image change.

But in spite of that, people I talk to still want to own homes. Why? Maybe real estate’s billboard should get to the heart of that:

Home: Your kingdom. Your rules.

Home: It’s where you live your life on your own terms.

One surefire way to build trust with another person is to be straight. Give them an indication that they have all the facts. Stop touting the financial benefits of owning a home and get to the pride of ownership aspect.

It’s why some people I know have drained their bank accounts and taken a financial leap to get the keys. They don’t believe this is their retirement. But they do believe this is something that is theirs. It’s an ownership dream. It’s about roots.

They light up when they talk about it.

It’s time to reinvent the homeownership dream to better match the reality of modern buyers’ intentions. Otherwise, real estate’s billboard becomes just another drabble of blah to be passed by on the freeway.

Zillow sent an email to a bunch of MLS execs last week pitching the idea of moving from the Move-owned syndication platform ListHub to a direct MLS-to-Z listings feed.The reaction was swift.It reminded me of this quote…