“We were motivated at the beginning by the same dream that motivates us now, reinventing a disjointed and friction-filled process to make it easier for people to move.”

On the evolution from media business to transaction business:

“We will undoubtedly keep innovating and adding products and services on the long road to customer one-click trade-in Nirvana, but our entire company is now relentlessly focused on transactions and ready to scale from here.”

Announcing the Zestimate’s maturation from curiosity to offer:

“…this year, many customers in Zillow Offers markets will see that their Zestimate is a live initial offer from Zillow Offers. This will begin to realize the big hairy audacious goal we set 15 years ago when we launched Zillow of putting an actual price on every rooftop.”

I don’t mean that in a gotcha sense. This isn’t a Zillow is “hugging the industry while pi***ng down its leg” post. Let’s be grownups about this.

What I mean is that it all makes a lot of sense. Why wouldn’t you do this, if you were Zillow, believed your mission was both righteous and remunerative, and thought you could actually achieve it?

I’m just a humble small businessperson, but even I get that.

And, anyway, whether you hate or love Zillow, it just is.

Now, on the flip side of this clarity are things we seem to have lost our ability to process as a culture:

See, Zillow is also telling us that agents are part of their mission. Not always, but often. Zillow did over $1B in revenue in its Premiere Agent business in 2020. The bulk of its profit comes from this segment. One could argue that Zillow is slowly moving Premiere Agents into a place where they are so bridled by mandates, processes and benchmarks that they basically become Redfin agents without the salary, but still: agents are a big part of the picture.

So what we have here is a company that is aiming to make it easy to sell your house without an agent and is also invested heavily in agents (and, by extension, the brokers they work for)?

This is what you see when you go to Zillow.com/sell, and I think it captures neatly what the company is doing, and the relative emphasis it is placing on things at the moment: 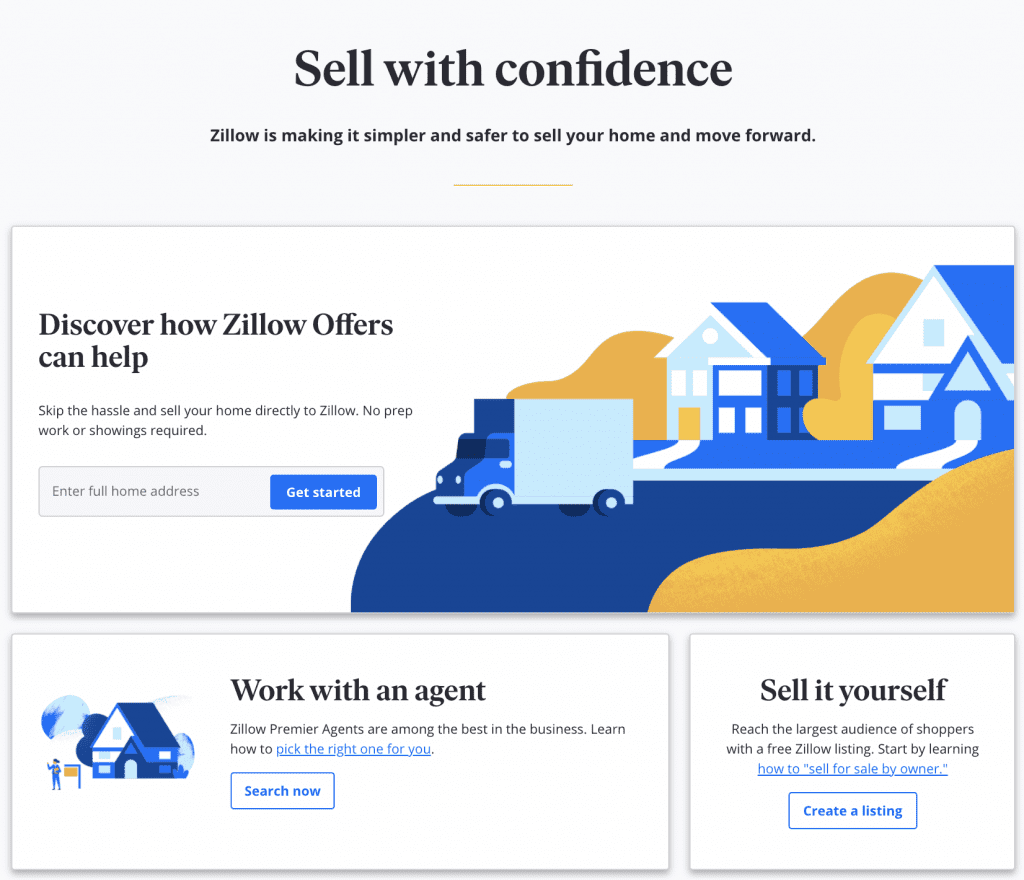 These things are only contradictory in our industry mind. To a home seller they just seem like options.

I know very well why some agents and brokers are angry about all of this. Three years ago, I posited the idea of an industry future where more production flowed into fewer “nodes of production.” This will push some agents out of the industry, and some brokers into mergers with others. Not all, not most, but some. And that will hurt. This is not Zillow’s intent, but it no doubt will be a consequence of their strategy.

The job is to deal with this reality such as it is. It’s what we do at 1000watt: help good companies succeed in an era of change and challenge.

The days of even talking about horses returning to barns, genies to bottles and toothpaste to tubes is gone.

I wanted to zoom out a little before touching on the Showingtime acquisition because the context matters when thinking through this.

It’s a big deal, and one that has already wigged a lot of industry folks out. I get it. Showingtime isn’t sexy in and of itself — it’s a web and phone-based appointment scheduler — but it is nested deep within the industry.

It’s baked into every significant MLS, so this means one broker (Zillow) now owns the company the MLS uses to handle showings for all brokers.

Lots of brokers use it to manage showings from their own websites, and use a Showingtime call center to handle phone inquiries. This means, theoretically, you could have a situation where someone calls to schedule a showing off ABC Broker’s website site and a Zillow employee answers the phone, “ABC Broker, how can I help you?”

This is straight up gas-on-fire stuff if you distrust Zillow.

So why would Zillow do this? Why wouldn’t they just build their own showing app for their Premier Agent partners? Why pay $500 million for a company that does something relatively simple?

First of all, Zillow could not let CoStar get its hands on Showingtime. I don’t know if CoStar made a run at Showingtime and bid up the price. I have zero inside information. But I think it’s quite possible that this was influenced significantly by defensive/strategic considerations.

And if I am right – if CoStar went hard after Showingtime – and forced Zillow to pay half a billion dollars, I’d argue that those currently experiencing paranoid meltdowns have just dodged a bullet. But that’s another post 😉

The second answer to the “why” question is even more obvious. As I suggested above, if your goal is to build a new and better real estate transaction experience, and you’re having a problem in one part of that experience, you do something to fix it. Clearly, Zillow was seeing some leakage between handing a prospective buyer off to a Premiere Agent and actually getting that agent, and the buyer, into the home to check it out. So this deal is the fix.

I do not think that Zillow did this to harvest Realtor data, kidneys, or DNA.

So look: we know where Zillow is going. Rich Barton is telling us really clearly. There’s no obfuscation. If you’re paying attention, it’s not really hard to see what the next steps might be to get there.

What you do, where you go, is not something I dare prescribe here. Everyone has their own moves to make. What’s important is that you make them.

You’ve probably seen this as much as me… You get a postcard in the mail from an agent in your area with a picture of a recently sold house and the sale price on it. You flip…