“The Uber of real estate?”

So read the subject line on a pitch email I got this week from a new FSBO site, ListingDoor.

I’m getting a lot of these lately. FSBO, limited service, menu-of-service, “big data-powered”, “on-demand” or otherwise unorthodox real estate companies are springing up like weeds after a spring rain.

OpenDoor, the company that launched a few months ago with a promise of “Selling your home in 3 clicks,” is doing a deal a day in its first test market.

SoloPro, which offers menu-based services and a rebate to buyers, is gaining traction and was named a finalist at Realogy’s FWD event a couple weeks ago.

Owners.com, one of the original FSBO websites, has been resuscitated by aggressive new backers.

It goes on and on.

Is it all a lot of fruitless disrupter-bation? Or is it for real?

I can’t answer that any better than you can, but there are three things I believe are important to consider when pondering this question:

In fact, I believe that most of what has passed as innovation or consumer empowerment over the past 20 years has actually made real estate more complicated.

I wrote about this a couple years ago and still believe it today.

If I wanted to buy a home in 1990, I’d pick up a phone, speak with a Realtor, have him or her show me a few homes and then buy one. Today, I’d likely do the very same thing, but only after weeks or months of downloading apps, combing through websites, parsing conflicting information and tying my wife and I in knots of emails and texts.

Sure, I have a sort of informational backstop now with all the data at my fingertips. I can verify what an agent tells me to a degree. But my process is longer, and noisier, now than it was pre-Internet.

Digital signatures? That was a game-changer. It improved the real estate experience deeply.

Almost everything else has danced on the surface.

My point here is that I do not think we are in any sense “done” with change in real estate. There’s still tons of room for making the real estate experience better for consumers and pros alike.

And as long at that’s the case, people will pursue that opportunity. Until, maybe, one of them hits upon something that sticks.

Here’s a visualization of what I just said: 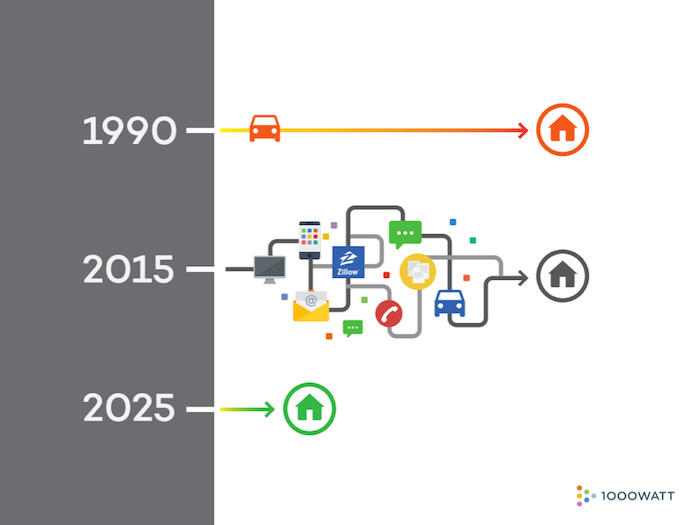 #2 Yes, we have seen it all before… but not in this context.

Could Uber have existed before 3G and Facebook? Of course not. The tech and cultural conditions weren’t right.

I have been around the real estate industry since 1997. I’ve seen innumerable FSBO/discount/auction/menu-of-service plays blow up.

They all came and went before the iPhone. Before Facebook. Before promiscuous online sharing. Before millions of us started sleeping in other peoples’ homes through Airbnb instead of hotels. Before most of what is important to us is kept in something we call the “cloud”.

Before a time when we want everything NOW.

In other words, while the ideas floating around this industry don’t change much, times certainly do. And that’s what will make or break any of these new companies.

This is why I pay attention to trends outside of real estate as much or more than I focus on those going on within it.

When Redfin hit the scene in 2005 they were treated to a sort of real estate nativism that is embarrassing in retrospect. The president of realtor.com trashed Glenn Kelman on stage. Agents refused to work with Redfin agents. MLSs dinged them at every opportunity.

Then we calmed down, and Redfin carried on, never gaining much share, but methodically building a different sort of real estate company.

Today, with $120 million in funding in the past 18th months fueling a rapid expansion, Redfin is a national company trying to dig deeper than surface innovation. And if you pay attention to Redfin’s messaging lately, you’ll notice it’s all about trust and the experience. Cost savings is back burner. In fact, a video surfaced this week in which CEO Glenn Kelman flat-out said that the rebates and discounts they offer don’t matter to consumers.

Yes, I know that Redfin is a mile wide and an inch deep. They don’t have a big share of any market. And they are still largely a buy-side brokerage in most places. I have also seen the analyses and heard the rumors about their numbers being terminally unworkable.

Let’s say that’s all true. You should still keep an eye on Redfin.

Because, if nothing else, they are now touching millions of consumers with a message that’s aligned with the times. They offer a mobile app scores of agents from other brokerages use to track the market and collaborate with clients. They share information others won’t, make claims others can’t, and shine light on the incongruity between consumer expectations and how most of real estate still operates.

Redfin could fail as a business but still be a catalyst for change. That is a powerful fact.

I guess this isn’t a practical post, but I think there is one important takeaway: no matter how sick you get of all the “disruption” talk, however fatigued you may be by the constant tech chatter, whatever your assumptions about what should happen in the future, you damn well better keep paying attention.

Tell me what to do

Listings have been the focus of real estate data conversations since the dawn of the Internet. It feels like the time has come for a much bigger data play in this industry – a new focus on…