Airbnb, the online real estate company that gets too little attention from our industry, is a treasure trove of inspiration.

Consider their “become a host page”. What if the screens agents used to upload listings were designed like this? 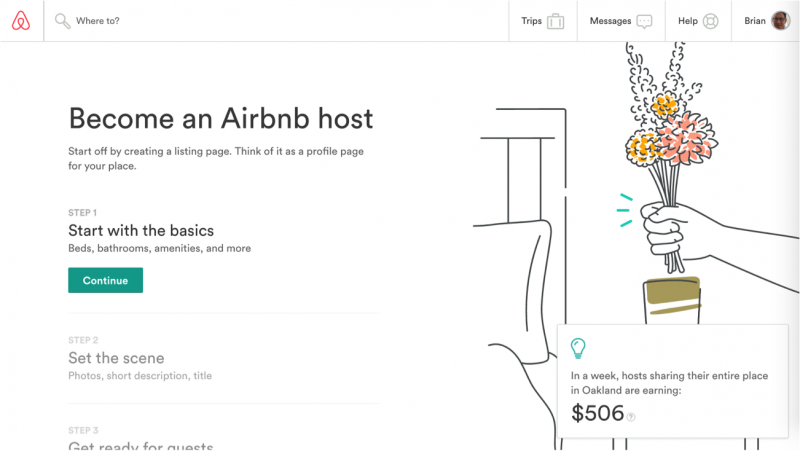 Open, simple, with helpful copy. A pleasure to use. Do you think something like this would improve the sorry presentation of most real estate listings?

Notice, too, the message presented to me before I enter anything: “In a week, hosts sharing their entire place in Oakland are earning $506.” So smart. Would it be cool if I got a message that said “Homes like yours are currently selling for about $939,000” when I logged into a home search site?

I think it would.

Even the businesses that have sprung up around Airbnb are interesting.Take Beyond Pricing, which optimizes and updates pricing for hosts automatically based on a smart algorithm. It takes two clicks to set up.

It’s good to look around sometimes.

Zillow bought Bridge Interactive Group, a three-person company that does intense MLS stuff most of the industry doesn’t understand.

That’s too bad, because what Bridge does is more material to the industry than all the other lead-gen, “future of home search” hoo-ha (Do we have a problem finding homes? Have they been hiding from buyers?) bouncing around the buzz machine.

1000watt had the opportunity to work with the Bridge team about a year ago on a small project and came away really respecting them.

My non-MLS geek understanding is that Bridge:

In case you haven’t noticed, how real estate data moves around is kind of important. Bridge is all about this, and has talent and MLS relationships to boot. So Zillow scooped them up. Seems smart to me.

Bridge, as part of Zillow, does seem to drift into Upstream’s lane a bit. They’re different things, yes, but maybe that’s the point. Bridge allows MLSs and agents to manage data more flexibly; Upstream proposes to do the same for brokers.

Zillow has to plan for the possibility that Upstream becomes a big thing even if they think that’s unlikely. It’s hard to imagine this didn’t play at least some part in this acquisition.

It’s usually the complicated stuff that’s most important. This is some of that stuff.

I am going to be speaking at Inman’s Luxury Connect event in October about a new luxe brand project we’ve been working on. I look forward to sharing more.

And the event… holy cow, I can’t wait. It’s at the Beverly Hills Hotel. Join me for a pretend power lunch in the Polo Lounge?

When I bought my home six years ago, my agent was a friend who sold real estate full time at her one-woman brokerage while she was busy building an entirely different career in marketing and raising a…