Friday Flash: How to kill a portal

Something I’ve been thinking about:

Only about 10% of all buyer and seller leads are generated online, through portals.

Those portal leads, minus the first time homebuyers, were all, at some point, some broker or agent’s client.

A client that got away.

You want to kill the portals? Get better at post-close marketing. If you’re good at that, you’ll stop feeding the lead machine.

Errol Samuelson was Chief Strategy Officer of Move and President of Realtor.com. He left that job a year ago to join Zillow as Chief Industry Development officer.

Move and NAR sued Errol shortly thereafter and won an injunction that kept him from working for over eight months. This happened before News Corp. bought Move. Before the Listhub/Zillow relationship blew up. Before Zillow and Trulia merged.

If the objective was to keep a talented industry executive from helping Zillow, Move and NAR succeeded. For a while. The injunction keeping Errol from working was lifted this week.

But Move and NAR are pushing on with the litigation. A trial is scheduled for the fall.

You may think Zillow is the Evil Empire. You may question Errol for leaving Move so precipitately. You may like to read about lawsuits and conflict. You may not care one way or the other.

But Errol is a friend of mine, and Move is a former client of 1000watt. Errol’s jump to Zillow was jarring for me, and impacted my business more than I can tell you here.

At this point, I know both parties are being hurt by this prolonged ugliness. There’s no “winning” now.

Drop the lawsuit and Move on. May the best and smartest people win.

A company called Victor has just launched an iOS app for “on demand private jet booking.”

When the revolution comes, we can blame these guys.

Z has done reviews for years. But now you can search agents by sales, listings, reviews or specialization.

Selling rankings to agents is like selling Medicare reform in Florida. You don’t do it if you want to win. But I think Zillow’s going to make this fly for one reason: they asked for agent sales data rather than taking it.

Other brave but failed attempts at agent search + rankings – by Realtor.com, Redfin and the Houston Association of Realtors, most notably – displayed past sales data directly from the MLS, without agent consent. Zillow has spent the last year and a half asking for – and getting – past sales data from agents who gave it to them, gladly, in the interest of capturing more consumers.

Just like brokers from 2007 to 2010 gave their listings to Zillow, gladly, in the interest of doing just the same thing.

Draw whatever lessons you want from that. But this was smartly played.

Zumper is one of those companies we don’t talk about much in the industry, but is worth tracking. They’ve been doing some pretty cool stuff with online rentals over the past couple years. 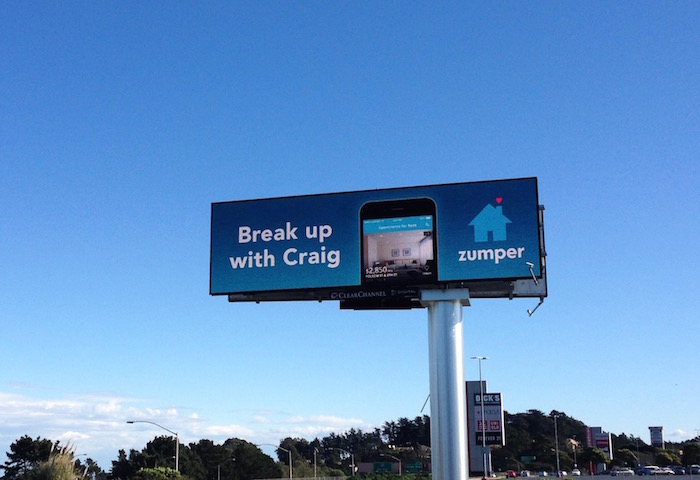 My other favorite outdoor campaign?

I have a confession

I have – on occasion – participated in the “Buzzfeed-ification” of the Internet by taking silly quizzes that serve no purpose other than to waste time and rack up clicks and page views for the source. For…