Friday Flash: Getting the message

The world has gone mad for messaging.

Snapchat. Whatsapp. WeChat. Facebook Messenger. Hundreds of millions of people are now using apps like these to make fast and fluid connections with each other. The lightness of these apps smooths the subtle frictions inherent in their predecessors, email and SMS.

I used to text my family members. Now we all use Whatsapp. It’s the same… but not. It’s cleaner and more immediate in ways I find hard to describe but feel quite clearly.

I recently asked my 16-year-old niece why she communicated with all her friends via Snapchat when she could just text them. Her response: “I dunno, it just feels more personal.”

I bring this up because the communication between real estate professionals seems throttled by a lack of such easy connection.

Eight years ago, ActiveRain was the state of the art in real estate community, a vibrant place where agents could communicate with peers. It’s still here today, but feels tired – as if everything and everyone is moving in slow motion through a heavy, burdensome user interface.

The MLS is the connective tissue of our industry. Agents do business together on this platform and use it to communicate all manner of information. But there’s a ton of friction. And in most MLS software, the agents on either end of a deal are like two people on opposite sides of the plexiglass in a prison visitation room who can see one another, and can talk to one another through the receiver, but remain basically apart.

There’s a lot of opportunity for whoever makes agent-to-agent communication and connection as simple as it should be.

ShowingTime this week announced that it has integrated messaging into its industry-leading showing software: 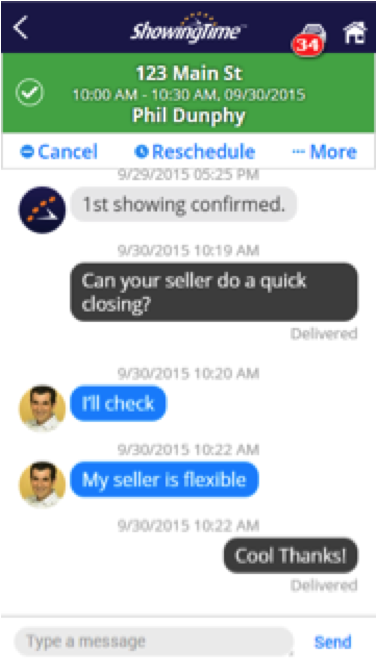 Homespotter added agent-to-agent and agent-to-consumer messaging into the home search apps they provide MLSs, brokers and agents. It effectively ends the tangle of emails, texts and voicemails that are the byproduct of most home searches. 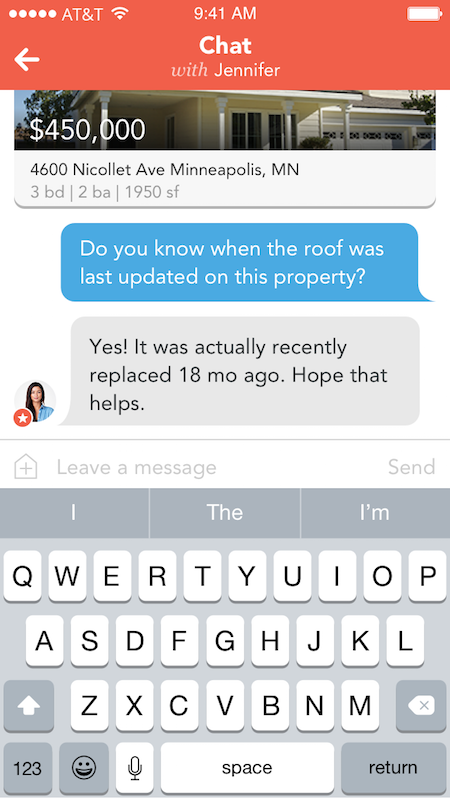 Dotloop’s mobile app has chat, but it’s tied to loops. I’m thinking of a simpler, more open platform on which any agent could message any other agent quickly. Where an agent could create groups of agents and every agent’s information is baked into the app, available to user #1 on day #1.

There must be a large Chicago-based trade association that could benefit from such a thing.

Anyway, look for a lot of activity here in the next year.

For 10 years, social media meant a lot of things in real estate, most of it nonsense.

Today social media in real estate means (or at least should mean, in my opinion) only one thing: advertising.

Facebook now lets the average agent advertise with the data-driven power and precision of Proctor and Gamble. I continue to hear from agents who are leveraging Facebook ads in creative ways with great results.

And now Instagram has begun to open up its ad platform more broadly.

Hmm… highly targeted ads in a photo-driven app. Sounds like it might present some interesting opportunities for real estate folks, huh?

The “social” opportunity for real estate is no longer free, but it’s much more exciting.

We’ve added a bunch of new tech companies to the 1000watt Index over the past couple months. New startups and apps abound.

The Index is something we started years ago internally. It was a quick reference tool for us and our clients. Then we decided to put it on the web. It’s a simple resource free of our own judgement, or anyone else’s.

I still use it a lot. Save it to your phone’s home screen and you’ll have a little pocket guide to real estate tech with you at all times. It’s kind of like the NAR Expo without the sales pitches and swag.

I like this campaign from Realtor.com. I always thought the whole “Accuracy matters” thing was weak. It declared something without telling us why we should care to listen. This new play connects the dots.

I also just appreciate that Move continues to show some competitive mojo. Previous Move leadership was good at denial and whining; the new crew is acting like they want to win even though they are still trailing Zillow.

[Disclosure: 1000watt has performed work for Dotloop and Homespotter in the past].

It’s getting to be that time of year when our clients wrap up 2015 marketing and gear up budgets and strategies for the new year. If I had to focus on one thing to start off 2016…